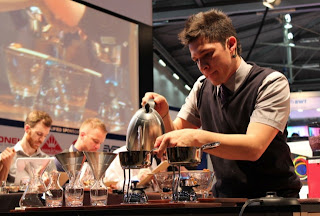 Did you know that in 2012, Raul Rodas, known as "El Tigre" became the new 2012 World Barista Champion!! Congratulations to this young lad who proved himself in Vienna, Austria, in a very tough competition. Raul is the second competitor from a producing country to win the World Barista Championship, making his victory the second consecutive such win, following Alejandro Mendez’ title in 2011.

Mr. Rodas competed with pulp natural processed coffee from where else – Guatemala – hailing from Finca Soledad, in the Acatenango region, a farm I had the opportunity to visit earlier this year. Coffee was experimentally dry fermented for 14 hours, then dried for 15 days on raised African-style processing beds.